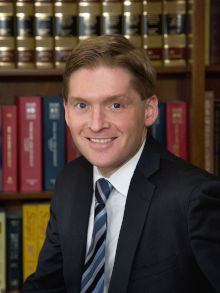 Dan Thistle grew up in Montgomery County, Pennsylvania and is a graduate of St. Joseph’s Preparatory School and the University of Pennsylvania.  After graduating from Penn, Dan followed in his father’s footsteps and attended the Villanova University School of Law.   In October, 2006, he was privileged to join him as a member of The Thistle Law Firm.

In joining the firm, Dan’s hope was to provide the best services possible for his clients. This desire led to his decision to obtain his Master’s Degree in Trial Advocacy from Temple University’s Beasley School of Law in 2010. He has been named to the Pennsylvania Rising Stars list by Pennsylvania Super Lawyers from 2015 - 2018 - an honor bestowed on only 2.5% of attorneys under the age of 40 in Pennsylvania.  In addition to his excellent legal training and advanced degrees, Dan learned valuable lessons practicing alongside his father, Daniel L. Thistle, one of Philadelphia’s premier trial attorneys. Dan, Sr. advised his son to always put his clients’ interests first, to work hard in order to get the best possible results for them, and to complete these tasks with honesty and integrity.

Dan keeps these principles in mind as a partner of The Thistle Law Firm where he continues his father’s practice of representing those who have suffered serious personal and economic injuries due to medical malpractice, products liability, auto and trucking accidents, wrongful death situations, defamation, construction accidents, and miscellaneous mishaps.

The eldest of three children, Dan is a resident of Center City Philadelphia. An avid Philadelphia Phillies fan, he attends games whenever possible. He also hopes to return one day to rowing on the Schuylkill River where he spent eight years on the crew teams for St. Joseph’s Prep and the University of Pennsylvania.