Appendicitis, a condition in which the appendix becomes swollen, painful, or inflamed, is considered a medical emergency that affects 1 in 20 people in the United States every year. Appendicitis is often acutely painful, and if not treated promptly it can lead to sepsis, septic shock and even death.

A perforated appendix does not need to be a death sentence however. With rapid and proper treatment, it is possible to make a full recovery. But if a doctor or surgeon does not initially diagnose a patient with appendicitis, treatment is often delayed, leading to serious consequences. If you or your loved one suffered a serious injury or death due to undiagnosed or misdiagnosed appendicitis, you may have legal standing to file a lawsuit for medical negligence or medical malpractice.

Your appendix is a small tube, about four inches long, that is located where the small intestine and large intestine meet, in the lower right area of your abdomen. The function of the appendix is still unknown, although there are theories that it may be a storehouse for bacteria, or just a leftover organ that had a purpose in our distant past, but is no longer useful. Removal of the appendix causes no known health conditions.

Appendicitis can happen to anyone, but is most common between the ages of 15-30, and is also more common in men. Inflammation in the appendix can cause it to become blocked off for some reason – possibly by stool, or a foreign body. The exact cause is still unknown in the medical world, though it may be due to an infection that triggers inflammation, trapping bacteria inside the appendix.

If treated quickly, studies have shown the risk of rupture is low – less than two percent if treated within 36 hours of the start of symptoms. If the blockage is not cleared quickly however, the appendix will rupture, or perforate, and spill infectious material and bacteria into your stomach. 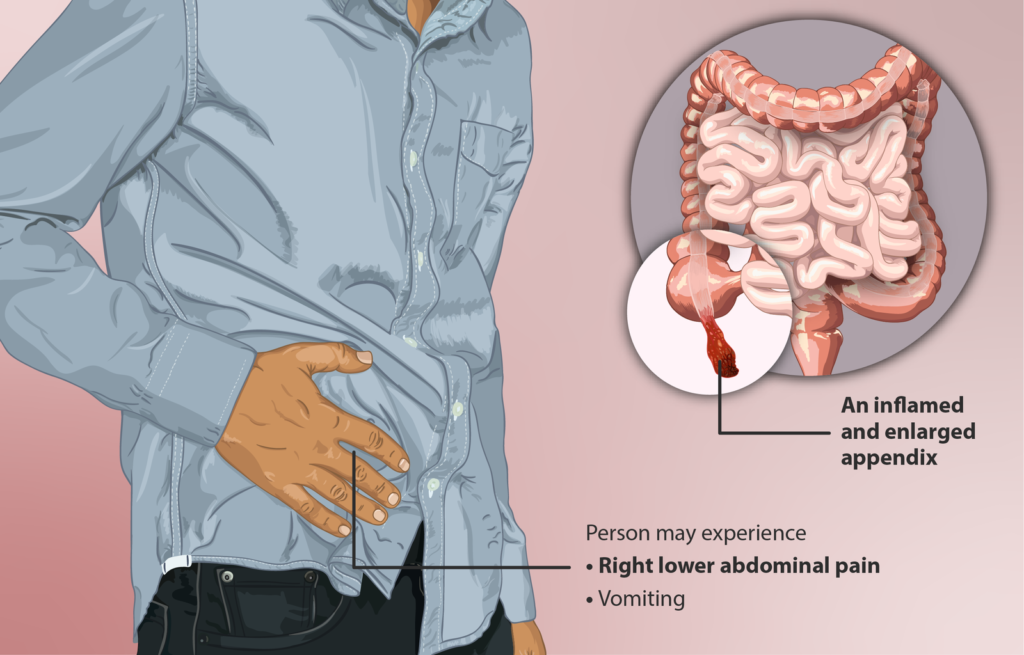 What Causes an Appendix To Rupture?

If not treated quickly and appropriately, the bacteria and pus trapped inside the appendix will build up, causing pressure and swelling inside the organ. This is called peritonitis, an inflammation of the membrane that lines your inner abdominal wall and covers the organs within your abdomen. If this swelling is not remedied, then the blood supply to the appendix will stop flowing, causing part of the appendix to die off.

A tear in the dead part of the appendix wall can then occur, and the pressure inside the appendix will push the infectious bacteria and pus out of the appendix and into the abdomen. While many think of a rupture as something like a balloon popping or exploding, it is in actuality more like a slow leak.

This leak can lead to sepsis, or septic shock. Septic shock is a wide spread infection that can cause organ failure and low blood pressure. It can cause a patient’s condition to rapidly deteriorate, and may lead to death if not treated immediately. Signs and Symptoms of Appendicitis

Because of the dire conditions an untreated ruptured appendix can lead to, it is critical that an examining doctor be familiar with, and able to identify, the signs and symptoms of appendicitis or a perforated appendix. They include:

However, when someone is suffering from appendicitis or a ruptured appendix, not all of the classical signs and symptoms of these conditions may be present.

Symptoms of a Ruptured Appendix

After a rupture, the pus and bacteria leak into the abdomen and pressure inside the appendix is relieved. This may actually make you feel better in the short term, but is much more dangerous in the long run.

After the bacteria enters your abdomen, peritonitis sets in. Peritonitis symptoms are similar to the initial symptoms of appendicitis, with a few key difference:

Abscesses may also form where your body attempts to block off the infection from the rest of the abdomen, causing pain in other areas of your abdomen.

When determining if there is an issue with the appendix, it will be important for the radiologist or other reviewing physician to visualize the cecum (a large pouch marking the beginning of the large intestine to which the appendix attaches), as well as the appendix.  Classic signs of a perforated appendix include an abnormally enlarged appendix with perihepatic fluid and inflammation/periappendiceal soft tissue stranding.  If this is seen in imaging, surgical intervention will be needed immediately.

If a doctor fails to diagnose appendicitis, it can have deadly consequences. Appendicitis misdiagnosis can occur for a variety of reasons, including

Initial follow up is key to catching appendicitis. If a doctor discovers that someone is still suffering the same, or worse, symptoms at a second visit, then they will be much more likely to properly diagnose appendicitis. If your doctor fails to follow up with you within 24 hours of your initial visit, you may have cause to sue for negligence or malpractice.

The individuals most at risk for a misdiagnosis are children and infants. In fact, misdiagnosis rates for children aged two-twelve can be as high as 57%, while the misdiagnosis rate for those under 2 years old is nearly 100%. This may be because children have less specific symptoms, and because of the broad overlap of symptoms with other common childhood illnesses.

When Should I Suspect Medical Malpractice for a Missed Ruptured Appendix?

Additionally, if a CT scan is ordered and it plainly shows either appendicitis or a perforated appendix, and these signs are missed by the radiologist or other reviewing physician, this could also lead to a malpractice claim.  Unfortunately if there is a significant delay in treating a perforated appendix this will likely lead to your loved one passing, in which case a family member would need to represent their estate in litigation.

The Thistle Firm is experienced in handling cases involving the misdiagnosis and failure to treat appendicitis and ruptured appendix.  If you or a loved one suffered serious harm because of a delay in diagnosis and treatment of these issues the attorneys at The Thistle Law Firm are here to take your call at 215-525-6824. You can also reach us by filling out our form here.